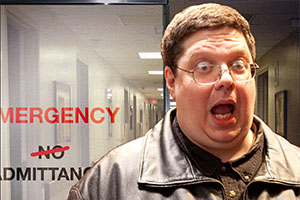 Episode 51 has been uploaded to the Episodes section of the website!
Ingredients: Intro, No muslims in Space, Dead Dr. Who was secretly a badass, Rob Ford calls radio station in Toronto with a fake name to defend himself, serial seizure fakers, that’s Captain Justice to you, and of course, no muslims in space. Includes bonus intro material secretly recorded. Intro: Pursuit of Happiness by Kid Cudi (Steve Aoki Remix)

Episode's listed on this website are downloaded from Archive.org and displayed here to help organize and archive the show's progress.
All credit goes to the Unkle Dak Show crew, The streamripper's on the Rant Radio Forum, and of course the file uploaders of the show.
The "Gross Hospital Stories" image is from the Rant Radio website, credit goes to Rant Radio for the image.

The TUDS Unofficial Archive is hosted and maintained by naypalm